Who is Wulf Utian (Wikipedia)

We departed Cleveland for Lisbon on election day, uncertain what sort of America to expect on our return next May. Fortunately, America seems to have voted for “normal.” The ‘Humpty Trumpty right wing MAGA Republicans’ lost in every battleground state. The left wing ‘woke progressives’ likewise lost many of their seats, accounting for the Republican takeover of the House. Hope both sides have taken note and learned lessons. But I am not optimistic.

After the recent troubled years, ugly politics, and covid, a slow 24-day cruise to Cape Town down the West coast of Africa seemed what the doctor ordered to recharge our batteries. This Prequel to my Letters from Cape Town, illustrating just some of the interesting places we visited and a few highlights, is offered to precede our new season’s adventures in South Africa. 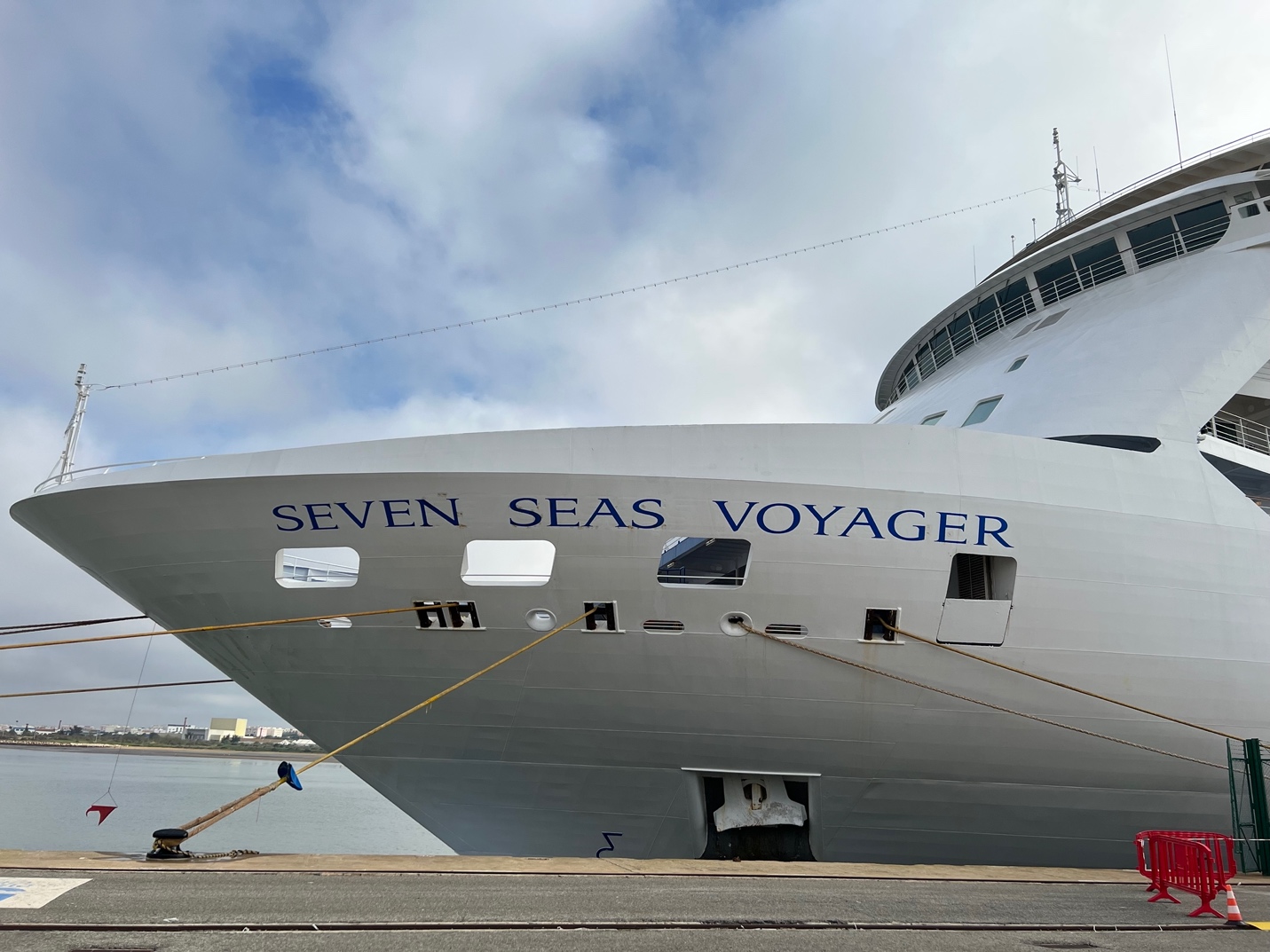 Our cruise started in Lisbon, a lovely city especially beautiful from the ship.

First stop was PORTIMÃO on the southwest tip of PORTUGAL, clearly still reeling from the Covid epidemic and economic slowdown.

After a day at sea, we arrived in the CANARY ISLANDS, first stop SANTA CRUZ DE LA PALMA. What a treat and what a feast for the eyes. The island is spectacularly beautiful, the main town picturesque and spotless. We immediately WhatsApped the family telling them we were looking for homes for all of us!

Our next island in the Canaries was TENERIFE, grown since our last visit in 2016, and now quite crowded, with traffic problems.

A nerve-wracking  serpentine road into the volcanic mountains brought us into the World Heritage Site Biosphere. Flora changes dramatically as the elevation rises.

There are coves and quaint villages, but I could not imagine commuting from the main town on these serpentine and narrow roads with steep drop-offs and no protective rails, never mind at night.

We had a special Shabbat Service at sea on Friday November 18 with over 30 attendees from 4 continents all recognizing and singing the same melodies. Remarkable. Even more remarkable is that the service was led by an Israeli tenor, one of this week’s key entertainers, Shimi Goodman, with a voice matching some of the best Cantors we have heard. I asked him why he chose the commercial track, and he told me he was not religious, although a proud Israeli and Jew. I told him to watch the movie The Jazz Singer with the story of Al Jolson.

PORTO GRANDE (MINDELO BAY) in the CAPE VERDES has one striking feature, a slight resemblance to Cape Town. Look at the next photo – what do you think?

PRAIA, the largest city of CAPE VERDE, on the southern coast of Santiago Island, is largely poor and dry. There is a wealthier section, with fancy homes and apartments, but little landscaping and rather unattractive. Like so many of our previous stops the Chinese are here. They built a large University which in less than a year has 6000 students, and the first medical school. As with everything Chinese, it comes with strings attached, this time giving China fishing rights in the Cape Verdes. So it is likely that the source of 80% of the island’s economy, fishing, will soon face waters depleted of fish.

We had an excellent Thanksgiving Dinner on board, turkey with all the trimmings and pumpkin pie, and the ship was appropriately decorated.

Shabbat service Friday 25th November was even better than the previous week. Not only had the word got out that Shimi would be conducting the service and so the crowd was larger, but we were treated to a wonderful rendering of My Yiddishe Mama as an after-service treat. Truly spoiled!

Even luckier for us, sitting alone the following day at sea, next to the piano in the Observation Lounge catching up with emails, Shimi and Chris Hamilton, the other key entertainer for the past week, a pianist in the Victor Borge style more classically based, suddenly arrived. “We are here to practice for tonight’s concert.”  Together they are called TIANO and have performed worldwide. For the next hour Moira and I enjoyed a personal concert with them interacting with us between numbers, explaining the choice of music or asking for feedback. I told them I was on the Board of Cleveland Piano and would like to get them in concert for one of our Cleveland Piano events in 2024. They were thrilled. So were we.

Next stop was TAKORADI, GHANA. The best part was the smiling and friendly people in the huge marketplace.

We arrived in  LOMÉ, TOGO, to temperatures close to 90 and humidity close to 100. Hot!

SAO TOME, an independent Portuguese speaking island on the Equator about 150 miles off the coast of Gabon, is the second smallest and second-least populous African sovereign state after Seychelles. Verdant, friendly, hot, and humid, clean, with happy looking people. We cancelled our cruise organized tour, found an English-speaking local taxi driver with a clean small SUV, and had a wonderful tour of a large part of the island. While not an island we would choose to live on like, for example,  La Palma, it certainly warrants a visit.

I cannot leave the island of Sao Tome without documenting its history, about which I did not know. When the Jews were expelled from Spain in 1492, thousands fled to Portugal, legally or illegally. Families that could not afford the transborder poll tax, $20,000 in current money, had their children confiscated at the border, baptized, and turned into slaves. Of these, sometime between 1493 and 1496, 2000 aged 4 to 12 were placed on ships and sent to the uninhabited island of Sao Tome, one of Portugal’s newest colonies which they wanted to develop. It is reported that only 600 of the children survived the trip, and these were abandoned on the beach. Some were eaten by indigenous large lizards. Some children tried to retain a semblance of their Jewish heritage, but by the 18th century most of the Jewish presence had perished. Many had cohabited with African slaves, and most of these lighter skinned survivors had fled the island to Brazil. Currently there are apparently no practicing Jews on the island, but many of the fair-skinned citizens can have their Jewish ancestry traced back to those 600 Jewish children.

Our penultimate port was WALVIS BAY in NAMIBIA, and what a delight. Walvis Bay is a large port serving not only Namibia, but South Africa, Angola, and landlocked countries like Botswana. Everywhere is spotless, lovely homes, excellent roads, and we saw no slums or poverty like many of the previous ports visited. A 30-minute drive past giant sand dunes into the Namib desert took us to an area they call moonscape, and indeed the topography does resemble the moon or shots I have seen of the surface of Mars. From there we went to a welwitschia reserve, the only place in the world where these fossil trees survive in the wild. With roots and trunks underground to seek water, the leaves and flowers are all that appear on the surface.

Swakopmund, about 30 minutes’ drive  from Walvis Bay is largely a vacation town, but wonderful late 19th early 20th century architecture, and also immaculate. There are miles of beach on the one side and large sand dunes on the other side of the road between the 2 towns and some wonderful beach home developments. All in all, with a low crime rate, wonderful climate, quick access to South Africa, we felt we could add Namibia as a good place to live in this crazy world. On the dark side, Namibia is the second largest uranium exporter, and the mines are owned by the Chinese. While the West was sleeping. China recolonized.

25 Days after leaving Lisbon we sailed into Table Bay and Cape Town appeared in all it’s glory. An American woman standing next to me on the upper deck watching our approach exclaimed “Wow, this looks like a real place!”  That it is indeed, and more. Next month I will be back to reporting on the real Cape Town. 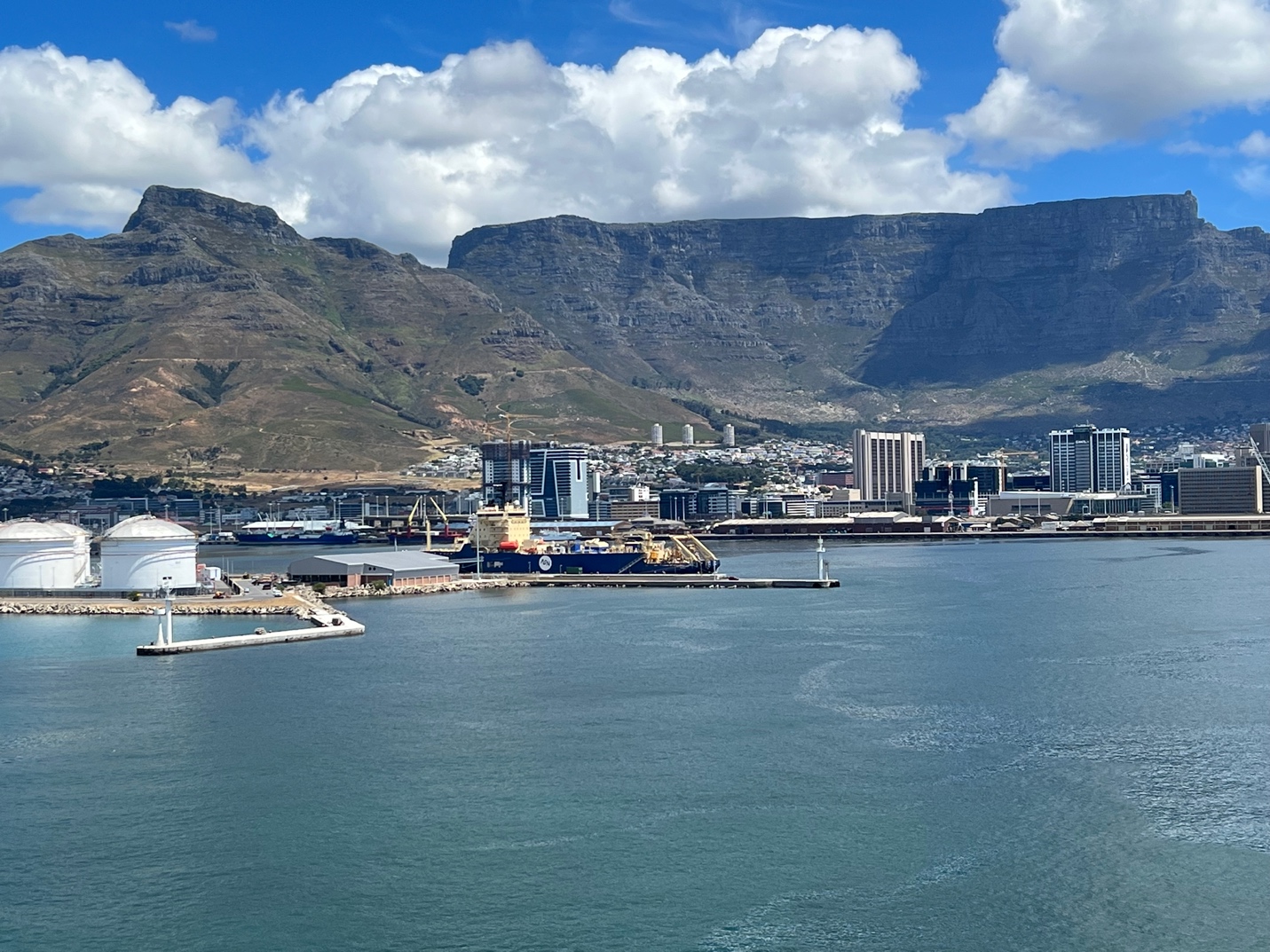